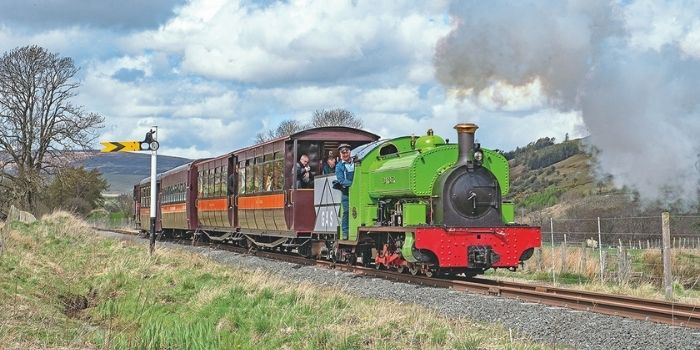 Steam train railway attractions are a great way to explore Cumbria, especially if you are a fan of these old locomotives. Not only do you get to see superb views of Cumbria and the Lake District, but they provide a great day out for you and your family too.

The Ravenglass & Eskdale Railway, or “La’al Ratty” as it is affectionately known, was opened in 1875 to bring ion ore from Eskdale to the Furness Railway at Ravenglass. The line was purchased by a preservation society and converted to a narrow gauge of 15 inches

The train journey travels through beautiful countryside from Ravenglass, calling at Muncaster Mill, Irton Road, The Green, and Beckfoot before finally reaching Dalegarth station, near Boot in Eskdale. From Dalegarth you can walk to Eskdale Mill,Stanley Ghyll Force and St Catherine’s Church.

Hard-working steam trains haul trains on this steeply graded railway. Comfortable coaching ensures passengers have a pleasant and leisurely journey through contrasting lake and river scenes of the Leven Valley. Trains run from April through to the end of October.

Originally this branch line of the Furness Railway carried passengers and freight from Lakeside to Ulverston and Barrow, then south to Lancashire. This was closed by British Rail in the 1960’s, and now the only part remaining is the 3.5 miles from Haverthwaite, through Newby Bridge to the terminus at Lakeside.

Preserved steam and diesel locomotives from Britain and overseas run between Alston Station (875 feet above sea level) and Kirkhaugh, following part of the old Haltwhistle to Alston branch line along the Tyne Valley in North East Cumbria and, recently, all the way to Slaggyford in Northumberland

Along the route there are fine views across the South Tyne valley, in the heart of the North Pennines Area of Oustanding Natural Beauty.

The Haltwhistle to Alston branch line, opened by the Newcastle and Carlisle Railway Company in 1852, was closed by British Rail in 1976. The Preservation Society was formed in 1973, and although unable to save the original standard gauge line, succeeded in opening a narrow-gauge line along part of the old trackbed in 1983.

With the extension opened in 2012 to Lintley and the 2018 extension to Slaggyford, the line is now 4.75 miles in length and runs between Alston in Cumbria and Slaggyford in Northumberland. This follows the extension of the original South Tynedale Railway from Gilderdale to Kirkhaugh in 1996. However, the Society would also like to continue the railhead northwards to the reinstatement of Gilderdale Halt to serve the picnic site on the South Tyne Trail.

Alston Station has had a recent major renovation, including a new café and a covered roof.

The line is now 4.75 miles long. There are visions to extend further, possibly all the way to Haltwhistle.