Facts About The Lake District

Facts About The Lake District You May Not Know 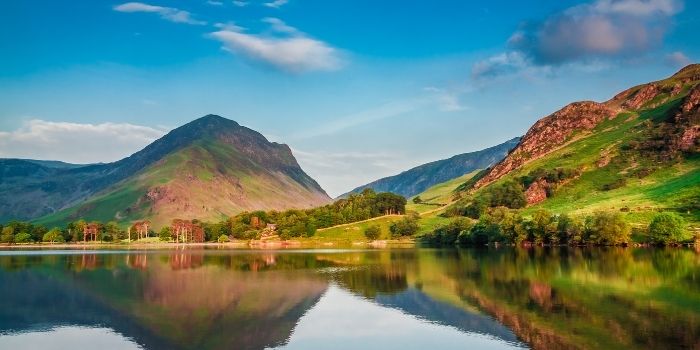 Anyone who has ever visited the Lake District and witnessed the sheer majesty and scale of the landscape will know this place is special. But it turns out that The Lake District has more to offer than just beautiful sceneries.

Here are a few facts about The Lake District you may not know.

It is the Home of Britain’s 44th Protected Food

The unique cultural heritage of the Cumberland Sausage was recognised in 2011 when the pork coil-shaped snack was granted protected status.

Known for its distinctive peppery taste thanks to a blend of both white and black pepper, the Cumberland sausage is made from chopped meat which gives it a more chunky texture than its counterparts made from meat that has been minced.

England’s Deepest Lake is in The Lake District

Wastwater is situated in the Wasdale Valley in the west of the county of Cumbria and is surrounded by mountains, including England’s highest Scafell Pike.

It was voted as Britain’s Favourite View in 2007 owing to the dramatic surroundings which include the Screes, millions of fragments of broken rock that protrude from the floor of the lake and reach up to 2000m in height.

Although there are 8 bigger lakes in the Lake District in terms of square kilometres, Wastwater is the deepest lake in England with a staggering depth of 243 feet. That’s the equivalent of 121 and a half uncoiled Cumberland sausages!

There is Only One Lake in the Lake District

This is a handy fact to know and will stand you in good stead for a pub quiz, being regularly used as a trick question.

Although there are 16 listed names of bodies of water in the Lake District, only one could be technically classed as a lake. Bassenthwaite Lake, situated in the north of the region near Keswick, is the only one that is actually a lake.

The others all include alternative names for a body of water within their title, such as a ‘mere’ (Buttermere for example, or even the largest and most well-known, Windermere), or a ‘water’ (as in Ullswater). The word ‘thwaite’, by the way, is an old Norse word for ‘clearing’.

It is Home to Britain’s Highest War Memorial

Part of the ‘Great Gift’ in 1919, the peak of Scafell Pike was one of 13 mountains to be donated to the National Trust to commemorate the war dead.

The land was owned by Charles Wyndham, 3rd Baron of Leconfield who, having undertaken active service himself during the First World War, wanted it to be “..in perpetual memory of the men of the Lake District who fell for God and King, for freedom, peace and right in the Great War of 1914-1918”.

Rangers from the National Trust have recently been tasked with rebuilding the 7.5 metre-wide landmark to commemorate 100 years since the end of the First World War.

There are Four Michelin-Starred Restaurants in The Lake District

Although the Cumberland Sausage may be synonymous with Cumbria and the Lake District, that’s not to say that fine dining doesn’t exist here.

On the contrary, in addition to the many wonderful eateries in the area, four of the restaurants have been granted a Michelin star.

Considering that this makes up half of the total number of Michelin stars given out to restaurants in the north-west of England as a whole, this is as impressive as it might be surprising – particularly given the relatively close proximity of more densely-populated areas of the region such as Manchester and Liverpool.

These bastions of fine cuisine in Cumbria are: L’Enclume (in Cartmel), Forest Side (Grasmere), Gilpin Hotel and Lakehouse and The Samling. The last two in this list are in the most popular area of the Lakes, Windermere and, being in easy reach of Windermere Marina Village, are perfect if you’re staying in our self-catering accommodation and feel like treating yourself to a meal out.

Cumbrians are well-known for their down-to-earth honesty so there is a caveat to this particular fact in that being economical with the truth will only actually be tolerated for one day in November.

This is when the annual contest to find “The Biggest Liar in the World” takes place at The Bridge Inn at Santon Bridge in the Wasdale Valley.

The contest, whose noteworthy previous winners include TV personality Sue Perkins, celebrates the folklore of a 19th century publican named Will Ritson who was famed for the tall tales he regaled visitors with.

One such fib was that the turnips in his beloved Wasdale were so big that locals could ‘quarry’ into them for lunch and then use them to shelter Herdwick sheep on the fells, though whether this was a commentary on the size of the sheep or the vegetables produced in the region remains a mystery.

Pencils Were Invented in the Lake District

The graphite mine at Seathwaite, first discovered in the 1550s, provided the natural resource required to make the very first pencil and the history of this humble item of stationery is charted at the Pencil Museum in Keswick.

Visitors there can learn about all things pencils and see special exhibits, including WWII items with concealed maps and the longest colouring pencil in the world.

The yellow pencil was completed in May 2001, weighing 446.36kg and is a practically unusable 7.9 metres long – that’s the approximate length of 13 unravelled Cumberland sausages laid end to end!

Sticky Toffee Pudding Was Invented in the Lake District

Inventing new food is not restricted to savoury items. The beautiful vistas at Ullswater inspired Francis Coulson to create the very first sticky toffee pudding in the 1970s.

Made from fig and light sponge smothered in toffee sauce, this dessert has become popular the world over.

The original recipe however is reported to remain subject of a secrecy agreement at Sharrow Bay with the chefs promising never to reveal the full details, so if you want to try the original sticky toffee pudding as initially created while you’re on a self-catering break here in the Lakes, Ullswater is the place to head. Cartmel, close to Windermere Marina Village, is also known for its delicious Sticky Toffee Pudding so head on over! 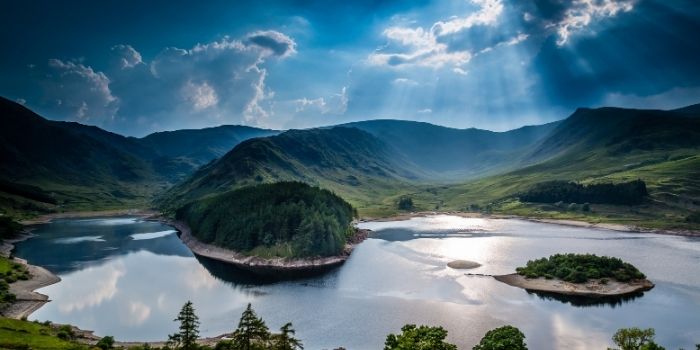 Two Villages Are Buried Under One of the Lakes

With the population growth in the early part of the twentieth century leading to a need for additional infrastructure to support more and more people, the Manchester Corporation was granted permission from Parliament in 1929 to build a reservoir in the Mardale valley to provide drinking water for the inhabitants of north-western towns.

Haweswater was originally a natural lake in a valley and was also home to two villages, Mardale Green and Measand.

Before construction of the dam to create the new reservoir could start, the buildings of the farms and homes of the inhabitants were pulled down with the local church and pub, the Dun Bull Inn suffering the same fate.

Coffins of the deceased buried in the graveyard were moved and reburied elsewhere and the valley was flooded in 1935 to create what is now Haweswater, the most easterly of all the Lakes.

Nowadays, if there is a drought and water levels are low, the remains of the former buildings of the two villages can be seen.

The Lakes Are Home of the Original Mass Protest

It may be common knowledge that a mass protest of 500 ramblers on Kinder Scout in 1932 led to greater access to the Peak District but less well known is that a similar act of rebellion took place in Keswick some 45 years earlier in 1887.

With landowners gradually closing access paths that had been used for generations, the final straw came when the owner of Latrigg, a Miss Spedding, closed the only paths on the fell and barred the way by planting trees.

Incensed by this, Henry Irwin Jenkinson led a 2,000-strong crowd on October 1st 1887 to one of the blocked paths and removed the ‘Private’ sign before unchaining the gate and marching down the footpath.

A year later the ensuing court case led to one of the paths, Spooney Green Lane, being reopened and prompted other landowners to permit access to footpaths on their property. Henry Irwin Jenkinson received a rapturous welcome to Keswick and the main gate to Fitz Park in the town bears his name by way of tribute to his dedication to the community.

Stretching 2,292 square kilometres, the Lake District National Park is the second largest throughout the UK. It’s second only to the Cairngorms, standing at an impressive 4,528 square kilometres.

The increasingly endangered Red Squirrel is native to the Lake District. The region remains one of the few woodland areas in the UK you can still observe them.

How the Lake District formed

It is a Haven For tourists

The Lake District gets around 15 million visitors every year. They come for many reasons such as the beautiful scenery or to take part in outdoor activities like fell walking. Tourism in the Lake District stretches back to the late 18th century!

We Have Herdwick sheep

Originally Herdwick sheep may have come from Scandinavia, but they are now considered to be native to the Lake District. Aside from their unique colouring, which sees their wool starting out brown/black and going grey as they get older, they also have unique properties that mean they can withstand the changeable and sometimes blistering cold weather in the Lake District.

What’s your favourite fact about The Lake District?